how to make your own website for free
Mathurin Gaingnon, was born in La Gagnonniere, two miles from the Saint-Aubin de Tourouvre church where he was baptized on October 22, 1606. He left for Canada before 1640 through Noël Juchereau, leaving Le Perche with his daughter Martha born around 1636, whom he had out of wedlock with Vincente Gaulthier. Mathurin returned to pick up his daughter in 1643. A merchant and member of the Community of Inhabitants, Mathurin is the only one of the three Gagnon brothers who can read and write. He appears to be the head of this strain family. He signs: Gaingnon. In the documents, the surname "Gagnon" is rarely mentioned, but rather Gaignon, Gangnon, Gaignons, Gaignion or Gasgnon. It would seem that the pronunciation in use in the United States is responsible for the change of this name and the form it is known today.
Although he was the oldest of the brothers, he was the last to marry on September 30, 1647 in Quebec City, with Françoise Godeau from Le Menil-Guyon (Orne), daughter of François Godeau and Jeanne Jahan (from La Ventrouze). Françoise was barely thirteen years old at the time, while Mathurin was forty-one years old. Mathurin Gagnon's mother, Renee Roger, was present at their wedding. Between 1649 and 1674, about fifteen children were born to this couple who would give the most Gagnon in Canada.
For years, the Gagnon family embodied family solidarity. Together, the three brothers settled on the Côte de Beaupre, between Château-Richer and Sainte-Anne. In winter, they seem to prefer Quebec City where, forgetting the land, they turn into traders. Still together, on August 14, 1651, they obtained the concession of a plot of land on Place de la Basse-Ville where they raised a house. A few years later, on October 6, 1658, enriched by agriculture and trade, they acquired a store.
Mathurin Gagnon died on April 20, 1690 at Château-Richer. His wife Françoise Godeau died on September 14, 1699 and was buried the next day in Château-Richer.
Jean Gangnon, was baptized on August 13, 1610 in the church of Saint-Aubin de Tourouvre. He was the first of the three pioneering brothers to found a home. On July 29, 1640, he married Marguerite Cauchon, daughter of Jean Cauchon and Marguerite Cointerel, originally from the Caux region, near Dieppe in Normandy. At least eight children were born from this union between 1641 and 1659.
Renee Marie Gagnon, born in 1643 in Quebec City, married Jean Ouimet in 1660, Marguerite Gagnon, born in 1645 in Quebec City, married Jean-Baptiste Caron, son of Robert Caron and Marie Crevet in 1661. In 1670, Jean Gagnon married Marguerite Drouin, daughter of Robert Drouin and Marie Chapelier. Then Germain Gagnon, born in 1653, married Jeanne David, daughter of Jacques David dit Pontife and Marie Grandin, in Chaâteau-Richer in 1688. Finally, the youngest member of Jean and Marguerite's family, Marie Gagnon, born in 1659, became the wife in 1678 of Louis Gagne, son of the Percheron pioneers Louis Gagne and Marie Michel.
Jean Gagnon died on April 2, 1670 at Château-Richer. His wife Marguerite Cauchon died 29 years later on June 26, 1699 at the Hôtel-Dieu in Quebec City.
Pierre Gagnon, the youngest of the brothers, Pierre Gagnon, was baptized on February 14, 1612 at the Sainte-Madeleine church in La Ventrouze. A ploughman, he was about twenty years old when he left with his brothers for Canada. Pierre unites his destiny on his 30th birthday, February 14, 1642, to Vincente Desvarieux, 18 years old, from Saint-Vincent-d'Aumermail in the Caux region, archdiocese of Rouen, Normandy, daughter of Jean Desvarieux and Marie Chevalier.
They had ten children together between 1643 and 1660, including Pierre Gagnon, born around 1646, who married Barbe Fortin in 1669 at Château-Richer, born on October 21, 1654 in Quebec City, daughter of the Percheron pioneer Julien Fortin and Genevieve Gamache.
Vincente Desvarieux died on January 2, 1695 and was buried the next day in Château-Richer. It was in this same city that Pierre Gagnon died on April 17, 1699 and was buried the next day.
Marguerite Gaignon, the eldest daughter of Pierre Gagnon and Renee Roger, was born in La Gagnonniere in Tourouvre and was baptized on October 5, 1598 in the Saint-Aubin church in Tourouvre. She married Antoine Bedard, then became a widow, and married Eloi Tavernier, a native of the parish of Saint-Malo de Randonnai, on February 3, 1624 in the Sainte-Madeleine church in La Ventrouze. Marguerite Gagnon left for Canada around 1643 with her two daughters Marguerite and Marie. She settled on the Côte de Beaupre where her brothers had already settled.
It is not certain that her husband Eloi Tavernier has left for Canada. Contrary to what the researcher Madame Montagne claims, Eloi Tavernier is not mentioned as present on the marriage certificate of his daughter Marguerite with Joseph-Mace Gravelle dit Brindeliere, on May 1, 1644 at the Notre-Dame-des-Anges chapel in Quebec City. However, no trace of his death has been found in Canada.
Her second daughter Marie entered religion on March 19, 1668 after the death of her husband Gilles Bacon. She pronounced her vows on October 19, 1669 and became Sister Sainte-Monique.
Marguerite Gagnon died at Château-Richer on December 7, 1677.
Marthe, is the natural daughter of Mathurin Gagnon and Vincente Gaulthier born around 1635 in the parish of Saint-Martin de L'Hôme-Chamondot. On January 29, 1635 in Tourouvre, Mathurin Gagnon and Vincente Gaulthier signed a deed of assignment concerning their child. Vincente Gaultier promises to feed and govern the child. Mathurin left for Nouvelle-France around 1640 with the other members of his family and returned to Le Perche around 1643 to pick up his daughter.
Marthe married for the first time on November 19, 1650 in Beaupre with Jean Doyon from Perigny (Aunis). The couple will have six children. Fifteen years later, Marthe Gagnon became a widow and married again on April 21, 1665 in Château-Richer with the Norman Jacques Lesot from Berneval-le-Grand (Seine-Maritime). Two children were born from this second union.
Marthe Gagnon died on November 21, 1670 at Château-Richer where she was buried the next day. 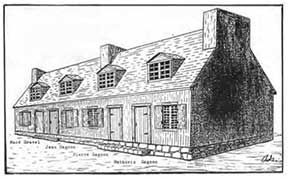 In 1651, the three Gagnon brothers, associated with their nephew Joseph-Macé Gravel, established a frontage 60′ store house on 24′ divided into 4 parts, on the west side of Saint-Pierre Street (facing the river) in Lower Town of Quebec. They sold it in 1668, to live exclusively on their land in ChâteauRicher where they were also successful.

Robert Gaignon, known as their cousin, arrived around 1655: He obtained a concession in 1656, in the Seigneurie of Charles Lauzon on the Isle of Orleans (future Sainte-Famille parish), where he was also prosperous. Robert, son of Jean Gagnon and Marie Geffray, was baptized on March 1, 1628 at La Ventrouze, Perche, France.
On October 3, 1657, at Notre-Dame Church in Quebec City, Robert, a ploughman, married Marie Parenteau, born around 1641 (+ or - 16 years old), daughter of Antoine and Anne Brisson of La Rochelle, France. They had 10 children. Robert died at the age of 75 on September 1, 1703 in Ste-Famille on Île d'Orleans. Marie died two years later, on November 16, 1705 (+ or - 64 years of age).
In 1688, Robert had given part of his land to his son Jacques and he would sell part of it to another of his sons, Pierre, when Jacques moved to Riviere-Ouelle. Pierre died the same year as Robert and his widow (Louise Létourneau) remarried the following year to Pierre Drouin, ending Robert's family estate.
The grandson of the ancestor Robert, Jean Gagnon (son of Jean and Jeanne Loignon) is at the origin of the Belzile. He married Genevieve Gamache, daughter of Nicolas (coseigneur de L'Islet). Captain of the Militia and guardian of the Belles-Îsles (opposite L'Islet), he added this particle to his name, probably to distinguish himself from his father Jean, also a militia captain. The name "Gagnon des Belles-Îsles" was taken up by part of the descendants and will be transformed into various variations up to "Belzil(e)".
(Source: Texts and images from "La Gagnonnière" magazine)